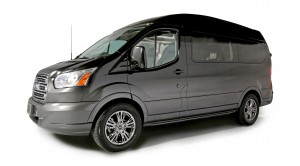 It’s not new news that Ford has hit some rough patches in sales over the last few years. But the new Ford Transit brings hope! Leave it to a conversion van to revive the companies less than exciting numbers. The recently introduced line almost doubled the companies numbers in the month of December ’14. That month alone produced 10,030 units, for an annual total of 20,488 sold. The Ford Transit has taken the van industry by storm and has earned the title of Americas Best Selling Full Size Van.

December also witnessed the transit beating out the E-Series in sales the second month in a row. Although annually the long standing E-series produced a sales of 103,236 units in 2014, the Transit had ten less months of sales on the calendar. The Transit Connect, Fords smaller version of the new commercial van also had a huge end of the year in production.

As far as Ford’s competitors are concerned, the Transit is the new kid on the block whose here to cause problems. December 2014’s sales in commercial vans goes as follows:

The Ford Transit has some great things going for it. In comparison to other commercial van models, the Ford Transit has a low base price compared to the competition. It’s sleek new design is also very appealing to buyers. The Transits easy sliding doors are a nice alternative to the heavy, archaic doors of the Ford Econoline. Riding inside the Transit is also far more peaceful and quiet in comparison to the loud, bumpy ride of some other commercial vans.

2015 is the year for the Ford Transit to really emerge, the E-Series is no longer in production and Fords new rookie will be up to bat.

Come talk to one of our van experts at Classic Vans, www.classicvans.com and find out how you or your business could benefit from a new Ford Transit.

purchased 2007 Coach House
Used Camper Vans  |  California
Bought a used 2007 Coach House Platinum. Customer received financing and was able to get the Camper Van delivered.
"This is my 13th RV. I was fortunate to find this gem of a company! We actually completed ..."
Ron V, Verified Customer

Unmatched customer service
Used Conversion Vans  |  Livermore
Purchased a 2005 Chevrolet Express Regency. Customer had us install a wheelchair lift and is a second time purchaser.
"Our wheelchair van was stolen, I talked with Marty in service. He set me up with the Owner ..."
Dex and Barbara Gonsalves, Verified Customer

So happy with my new camper van!!
Used Camper Vans  |  California
The customer purchased a 2009 Pleasure-Way Excel TD. She was able to get short term financing and solar installed on the RV.
"I am very happy with the service provided by Classic Vans on the purchase of my new to ..."
Carolyn, Verified Customer
‹ Classic Vans Home